Zitat
There seems to be a bug with the talent: starling spider from the vagrant skill tree. There is no cooldown if you simply let the spider die on its own instead of manually exploding it. 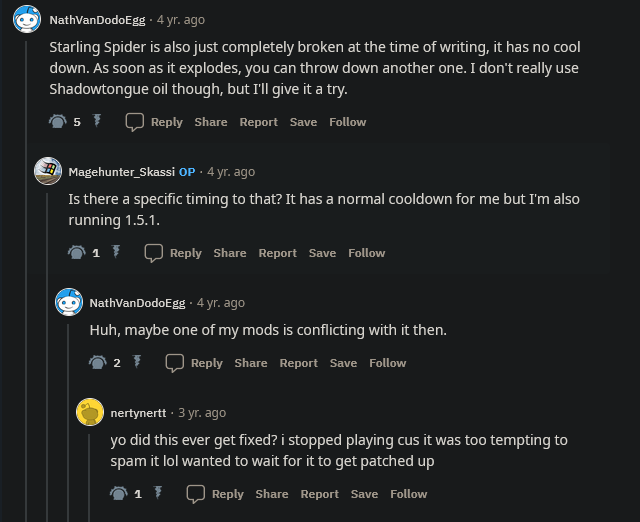 I know this is a minor bug and I am hoping there is a quick fix for it. I really enjoyed playing as a vagrant and really loved the ambushes you could set up with the starling dummy. But when i realized there was a cooldown bug, it really put me off from playing with this perk, because it became so easy to cheese/abuse with a talent that had no cooldown.
Nach oben

Zitat
Hello jonwoodland and welcome to the forum

Enderal Special Edition is a community project of the developer Eddoursul. SureAI only takes over the Steam support.
If it concerns the Enderal SE, better use the Discord server of Eddoursul.
"Meine Gefühle für Elfenwurzeln sind streng geheim, Späherin Harding!"
Nach oben

Zitat
thanks for the reply! this is on enderal SE, so I'll check out there discord and see if theres a fix.
Nach oben
Antworten
3 Beiträge Seite 1 von 1
Zurück zu „Support“