The Revised Edition of "Dreams of the Dying" is now available for pre-order!

The Revised Edition of "Dreams of the Dying" is now available for pre-order!

Tl;dr: The heavily revised physical edition Dreams of the Dying, my novel set in the Enderal universe, is now available for pre-order via Amazon - just head to my new website for a link. Special early bird prices are $32.99 for the hardcover with an illustrated appendix, $12.99 for the paperback, and $2.99 for the eBook. It’s a prequel featuring Jespar, but, for reasons outlined below, opens up a new canon. Amazon.de has yet to pick up the listing for the physical editions, but they are incredibly slow—I’m working to get that done.

This is Nicolas, the writer of Enderal speaking. As some of you may know, I’ve been working on an Enderal novel, Dreams of the Dying. First released as a web version, I spent the past year completely rewriting and improving the book, adding and removing chapters, revising characters arcs, and improving plotting, world-building, and style. In total, I rewrote the web edition three times from cover to cover. Well, it’s finally time: Dreams of the Dying is now available for pre-order on Amazon! 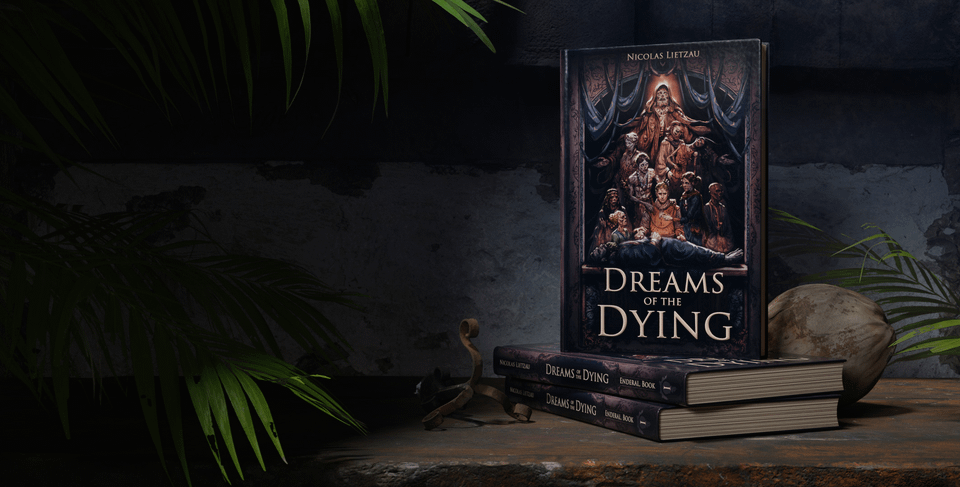 The English version of Dreams of the Dying will release on October 20. A German (and perhaps Russian) translation will follow as soon as possible.

Please note that the artwork is a rendering and that the actual hardcover looks slightly different, with same format but a matte dust jacket and a matte, laminated case. A big shoutout to Dominik Derow for the cover artwork, Johanna Krünes for her cover design, and Joyce, for her tips, patience, and help with this product shot.

The hardcover edition comes with an appendix that includes additional lore, such as an illustrated bestiary, a guide to Kilayan fashion, illustrations of the (re-envisioned) seven Light-Born, a short guide to the Makehu language, and much more.

Even though Dreams could be considered a prequel, I didn’t write this as an expansion or fan service but rather as my debut, and a book that stands on its own. This edition differs vastly from the web version, and, though it is up to you to judge, I’m a million times happier with it.

If you’re on the fence and would like to wait for reviews—here’s hoping I get enough—I fully understand. However, if you would buy the novel, you’d do me a great favor if you considered pre-ordering. One of the biggest challenges as an indie author is exposure; since Amazon registers all pre-orders as Day 1 sales, a lot of Day 1 sales would give me a chance to climb in the novel’s category and boost visibility for readers outside the Enderal community. To make this worth it to you, the book will sell for a special early bird price of $32.99 for the hardcover with the illustrated appendix, $12.99 for the paperback, and $2.99 for the eBook, as opposed to $37, $16, and $5. Just head to my new website and click pre-order—it will take you right to your local Amazon marketplace.

Unfortunately, Amazon.de has yet to pick up the listing for the physical editions, but they are incredibly slow—I’m working to get that done.

I’m aware the hardcover is in the upper price range, but it uses the best materials, and the illustrated appendix cost a lot to produce. It’s also the only edition where I make a more solid revenue, so see it as a way to support my work, if you wish.

If you’re a patron and pledged $110 or more since October 2018, I’ll be in touch a few weeks before launch to send out your signed hardcover copy right away. Thanks again for your support, Dreams became a far pricier project than I anticipated, and your patronage helped me immensely in covering the cost.

Lastly, a word of warning before you pre-order: For the paperback edition, I took the drastic step to separate Dreams and all future Enderal novels from the game canon. There are two good reasons for this. First, the Vyn games were created over 17 years, the earliest one being Myar Aranath in 2003. Fascinating as this idea may be, it also means that the lore of the Vyn universe was created by a myriad of different authors (the latest and current one being me when I joined the team in 2011). As a result of this, the lore of Vyn has always felt a little disjointed and inconsistent; I initially took these differences as challenges to conquer, but the longer I wrote, the more I realized how much these inconsistencies bothered me and how hard they made it to write the story and the universe I envisioned. Let me assure you that this decision wasn’t easy and does not reflect a lack of appreciation for the work of the previous workers. I stayed faithful to the lore whenever possible.

The second reason is a trickier one: Jespar. This character has been in my mind for nine years now, and I love him with all my heart. Still, the more I immersed myself in the story of Dreams, the more I grew aware of how incredibly constraining it was to write a story where the end is already written; because Jespar is alive in 8234 a. St. (1234 P.L. in new canon lore), you all know he will never be in real danger. Again, there is undoubtedly an intriguing challenge to writing such a “safe” story, but—similar to the lore, I increasingly felt like I was writing with fetters on.

So, what does this mean? Aside from the fact that anything can now happen, the consequences aren’t that drastic. Enderal is still Enderal, and Jespar is still Jespar, albeit thirteen years younger and at another point in his life. I changed and expanded details about his backstory, but his essential conflicts are still the same, only refined. Major changes include modifications to the Light-Born (their aspects, how they came to be, when and how they disappeared, and the societal consequences of that disappearance), the time frame of the different eras, and a complete rework of the magic system. Minor changes include dates, the spelling of names and locations (Kilay, not Kilé), and others details I tweaked for consistency and worldbuilding coherence.

And that’s about it. I’m aware and grateful for the love many of you have for this world, and believe me, I did my best to honor it; I just realized I cannot tell a good story with one arm tied behind my back. If it’s any solace, I can promise you that new book canon is ironclad – I’m pathologically obsessive about consistency and cohesive worldbuilding, but without a solid framework, that’s a recipe for frustration and disaster. See it as a different but nearby eventuality: details and fates may differ, but the soul of the world remains the same.

If all that didn’t scare you off, pre-order away! I also set up a Goodreads page for the book, so you can add it to your To-Be-Reads or even recommend it to your friends – this is an indie project by all means, so I’m grateful for every bit of support. Please keep in mind that the Goodreads is for the revised edition, not the web edition, so if you’re planning to leave a low rating, I’d be grateful if you waited to read the actual book in October 20. It’s a different experience.

Last but not least, a big thank you to everyone who supported me on Patreon, created fanart for Enderal, or just let me know they enjoyed this game and were looking forward to the novel. This novel was meant to be a 6-month stint but, boy, did it turn into something more. It sounds sentimental, but this last year has been rough personally, and your support and encouragement kept me going.

I hope this story will live up to your expectations.

Re: The Revised Edition of "Dreams of the Dying" is now available for pre-order!

Zitat
Congratulations Nicolas! I hope it (and you) do well!

Re: The Revised Edition of "Dreams of the Dying" is now available for pre-order!

Zitat
Thank you! I'm keeping my expectations low but my hopes high.